More than what you see 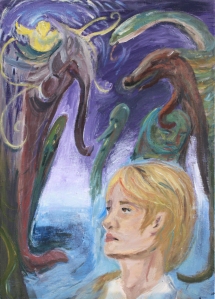 The term ‘imagery’ brings to mind, of course, images–verbal pictures that allow us to peer into the world which an author has dreamed up.  Imagery sometimes implies page after page of descriptive detail–in which case you might risk having the readers fall asleep and start dreaming up their own worlds.  But, a story without enough visual detail leaves the characters moving in an unsubstantial shadow land.

Imagery should includes more than what you see in your mind’s eye. It also needs to bring to life the sounds, smells, tastes, and textures of the world you have created. One of the appealing aspects of writing is that you do not have to stick with the conventional. Music can be  ultramarine blue or a person’s scent can be rough and sand papery. Using these metaphors which cross the senses is  called synesthesia, a term referring to a neurological condition in which senses in one pathway involuntarily leads to another. A person with synesthesia may see the number 5 and sense the smell of cinnamon.

How do you include imagery without overloading the reader with unnecessary detail? Beyond the senses, imagery should reflect the interior mood of the characters. The characters are not omniscient and do not pay attention to everything. They regard what they find worthwhile out of love, fear, ambition, or other desires. The writers has to get inside the characters head to see, smell and hear the world as they do. The sound of rain may be the dance of water sprites, or the dull thudding of depression, depending on your character.

This should not be so difficult. Right? After all you created the character. However,  it feels a bit like self-induced schizophrenia to be considering how each of many characters perceive the world around them.  The other challenge is that imagery cannot be subtle or its significance is lost on the reader. There is no easy short cut to descriptive passages that draw in the reader. The best advice is to practice. Create imagery and cut it down unmercifully, like a prospector washing tons of gravel until only the glinting grains of gold remain.

Artwork – detail from The Shadows that Follow Me by S.L. Listman

2 Responses to More than what you see