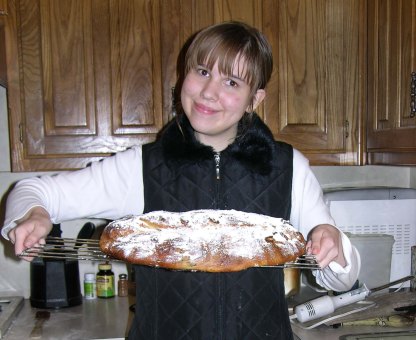 For an recent practice in sensory description, emerging writers chose a photo from their childhood–playing on a snow drenched hill, seeking warmth in the flicker of a fireplace, or splashing in a plastic pool to escape the summer heat.  For many  the photo showed them posed in starched clothes in front of a birthday cake. As part of the exercise, they were required to use descriptors for all their senses. Well, not quiet all senses but the five major ones. However, one did include the sense of balance in the dizzying sled ride down the snow drenched hill.

When it came to illustrating the required sense of taste, almost every nascent author choose to describe something that tasted sweet. Granted humans are only suppose to be able to differentiate between five tastes: sweet, sour, bitter, salty and the newly discovered one that we have been attracted to all along, the savory flavor found in meat. But it’s not that simple. In our experience, these tastes are combined in various percentages and mixed with the potent sense of smell. The results are almost infinite  variations in taste.

Descriptions of taste, like that of smell, have the power to invoke strong emotions, and bring memories lingering beneath the conscience to the surface. That is what Marcel Proust claimed. He said as an adult he remembered almost nothing of his childhood in Combray, except for a brief visit from a certain Charles Swann that interfered with his normal bedtime routine. At least this occurred until a bite of a madeleine sponge cake dipped in tea triggered a nostalgic episode of involuntary memory. Then, childhood memories began to trickle back, such as eating this same madeleine snack with his invalid aunt. Each memory lead to another, until they became a flood resulting in seven volumes about his neighbors in Combray entitled À la Recherche du Temps Perdu.  This masterpiece is commonly called Remembrance of Things Past in English, and includes the well-known classic about the doomed love affair of Charles Swann.

What is so powerful about taste? Our perception of how delicious food depends not just on the taste of the food itself, but also the color, the temperature, the smell, and most importantly, the people around us when we are eating. An adept description of taste actually affects all of our senses. But it takes a bit of skill to fully encompass taste with words; the English language doesn’t seem to be heavy with taste descriptors.

Finally, why did most of the writers tend to capture the memory of sweet tasting things? Memories of good times are more easily recalled than those of disappointing or stressful times. Good tastes are more memorable than bad ones. And, most of us have a sweet tooth.

1 Response to The forgotten sense