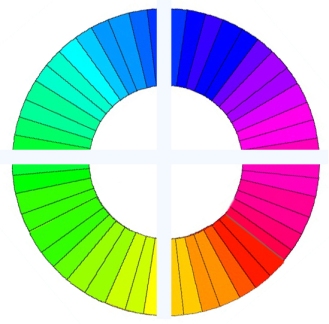 William Moulton  Marston theory published in his book Emotions of Normal People [1] is known by its initials DISC. It bears resemblance to the four temperaments recorded by the ancient Greek physician Hippocrates. Marston even created a diagram connecting the color wheel (with slightly more green) with his four ’emotions.’

Initial research for this theory was actually done among prison inmates (not exactly a normal population) and then tested among college students. It was a division of four nodal points of primary emotion,  not four different personalities. People exhibited some of all of these responses, but not in equal strength.

Both Dominance and Inducement were primary emotions exhibited by people wanting to be movers and shakers, while Submission and Compliance showed passive acceptance of surroundings. It resembled the extrovert/introvert dichotomy in that extroverts tolerate and even crave stimuli, while introverts seek calmer surroundings.

Dominance and Compliance were both  ways to deal with an antagonistic environment while Inducement and Submission were aimed at favorable environments. For some this is equivalent to thinking which prefers processes, in which one doesn’t deal with people as opposed to feeling in which people’s emotions are the impetus for behavior.

Creativity resulted as a combination of Dominance and Compliance. Marston who thought he supported the feminist ideas of the day, still saw men as creating more in the world of art because of their tendency to value Dominance higher than Compliance. He saw women’s contribution to art being more skillful and intricate based on a Compliance. Leadership on the other hand is seen as a combination of Dominance and Inducement. As Inducement increases, Compliance decreases; the person becomes more of a charismatic leader, but fails to attend to the actual tasks required to put new ideas into concrete form.

Finally Marston attributed overly aggressive exhibitions of Dominance to secretions of glandular substances; it seemed that endocrine system had replaced the Hippocrates’ body fluids in producing the four temperaments.

This entry was posted in Creativity and tagged creativity and leadership, personality and endocrine, William Moulton Marston. Bookmark the permalink.