Creating a team-like atmosphere in classes 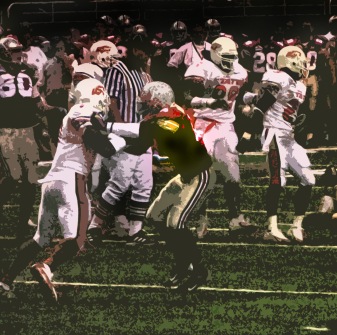 Imagine a group of athletes from different sport that all have a  general idea about playing positions in the other sports. However, they  have little  to no idea how their skills stack up against other in their group, whom they barely know. They have never played together, and they are told “You are now a team; you decide who plays what position. This week we will play baseball, next week we’ll mix up the teams and play football.”  Most class group assignments are actually based on this model. Much of the work required is deciding how to organize the team before anyone actually gets anything done.

Encouraging students to work as teams in class has many shades of difference from getting a group of athletes to work as a team. Sports teams are formed to wage athletic “war” and win against other teams. In classes the goal is to create a viable product rather than to win. The decision making that goes into teamwork to achieve specific goals by creating products are often removed from the athlete. They do not decide what position they play, who directs the team,  or how much practice is required.  Often even eating, sleeping and exercise habits are prescribed by others to ensure peak physical performance. Students expect coaches to be concerned with their activities outside of sports. After all, school grades and behavior are often tied to whether or not a student is allowed to compete.

However there are some commonalities. I have seen some groups in which one or two students do most of the work, just like star athletes that carry a team. Only the rest of the team gains nothing from this because the objective is to learn rather than win. However, this is also what happens in the real world on the job, and the people slacking do reap benefits.

Try setting student teams at competition with each other for a limited number of passing grades – like a strict curve in which as many students must fail as those that receive A’s. This is the academic version of tryouts for limited slots. Students who could do the work would be cut because the class had a limited size, or those would could not might remain if there were no excelling students. However, determining which students should be in a particular level class doesn’t work the same way as determining who should be playing on a team. If it was you would probably find not so much an increase in effort as a sudden rash of cheating, sort of like the rise in performance enhancing drugs in sports when athletes must do well to keep their jobs.

1 Response to Creating a team-like atmosphere in classes