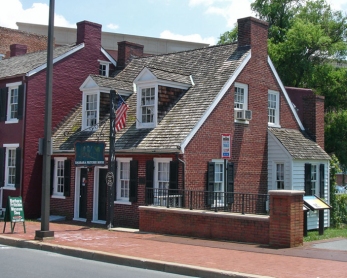 As a young child I assumed poetry must rhyme.  Meter was beyond my comprehension. It was only that constant repetition of ending sounds that mattered. In fifth grade, the teacher encouraged us all to enter a poetry recitation contest.  The selection had to be memorized.  In a conscious attempt to be an over achiever, I choose a poem longer than any other student, a ballad by John Greenleaf Whittier called Barbara Fritchie.

In what seemed to be a monumental task, I spent the next week committing to memory the story of an old Quaker woman confronting Stonewall Jackson as he marched into Frederick, Maryland.  I didn’t care much about the history behind the poem, but I loved chanting the neat rhyming couplets. Each ended on a single syllable accented word so I could really punch out those rhymes.

However, I did have a bit of a quandary what to do about the couplet that read:

Over the heads of the rebel host.”

Should I pronounce the end of the first line as “tossed” indicating the flag flapped in the wind, or force the rhyme?  If I said “toast” the poor listeners might think the flag was performing a wedding ritual or baking in the sun.  In the end meaning won out, and I pronounced Whittier’s made up word as “tossed.”

This was not a traditional competitive contest with a few winners. Rather it was a blatant attempt to foist a little culture on grader schoolers. The judges had a criteria for excellent, good and fair. Everyone received a ribbon.  On the day of the contest I managed to rattle of the entire ballad without a single error. Unfortunately for me, everyone else that participated in my class brought home a blue ribbon for excellent recitation, while I was given the lowest level, a white.

I entered the kitchen mournful, showing my feeble white ribbon and declaring I would never enter a contest that required speaking again. My mother dismissed the judge’s decision by saying, “It was a sing-song poem. Next year, choose one that doesn’t rhyme. You’ll do better.”  I hadn’t realized that reciting tightly rhymed poetry with its sometimes awkward syntax was harder that reading blank verse.

Later, in high school English class, when we were given assignments to write poetry, I asked about writing blank verse and the teachers were generally okay with it. The other students thought I was cheating, writing poetry without having the complication of making it rhyme.  In this day much of the published poetry is free verse, which has neither the conventions of a rhyming or regular meter. This departure from traditional poetry leaves many with the question: What makes poetry, poetry?

The basic answer is repetition.  When I write prose I search for synonyms so I am not always repeating the same words. Early on my mother pointed out that repeating the same words was the sign of a very amateurish writer. I also vary the syntax. Using both short direct sentences and longer ones with subjective clauses improves the flow.  Free verse breaks all these conventions of “good” writing by using intentional repetition. It may not be the repeated end sounds of rhyme, but the other sounds such as alliteration, assonance and consonance. Similar words, phrases and parallel construction are used over and over again. The challenge with free verse is creating a new structure, not an already established poetic form and repeating it so the new form has a recognizable pattern, a pattern with enough variation to keep it interesting.

One of my favorite poets, Robert Frost, said writing free verse was “‘like playing tennis without a net.'”[1] This changes the game, but it can be done. One of my students said poetry was expressing his ideas indirectly. He liked writing it because he could say things that he wanted to without letting people know precisely who and what he was discussing. That is not necessarily what makes poetry, poetry.  But it is part of what makes poetry good.

2 Responses to What makes poetry, poetry?