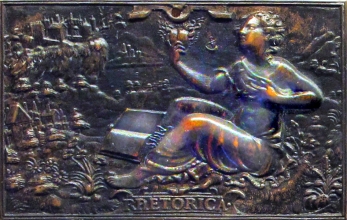 Charisma can be learned. This is not a new revelation. For millennia people have been teaching others the how to speak in a persuasive manner. In fact if you look up the definition of “rhetoric” you will find it was taught to achieve the same goals as “charisma,” the purpose being to move your audience to action.

Rhetoric was once part of formal education not only in ancient Greece, but also in the Middle East, China and Europe. Aristotle broke rhetoric down into its components – the three types of arguments that could be combined to persuade any audience: emotional, logical, and moral.  Romans then created the rules for designing a persuasive discourse called the five canons. Uncover the three types of arguments, put them together using the five canons, and the speaker should become ultimately persuasive. But they also began to sound a lot like each other.

So what is the difference between rhetoric and charisma? For one thing charisma is based more on the appearance of the speaker than the content of the speech. People judge others as being charismatic when their body language shows they are open and friendly, but also when they show great power. The charismatic person must strike a balance: too friendly is soft, too powerful is frightening. Finally there is the skill of showing presence or seeming larger than life.

Also charisma is not concerned with appeal to logic and emotions, but mostly rests on appeal to emotions. Observers that rate charisma in research show it is largely based on the use of non-verbal communication to send emotional signals. In order to teach people how to have emotional expressiveness, it has to be broken down into measurable factors. Essentially learning charisma is like taking acting lessons. People learn to control facial expressions, body movement and vocal intonations.

When people hear the word rhetoric; it also brings to mind a negative connotation. It is not just method for making persuasive speeches. It may mean an insincere argument, or words that are spoken without any significance.  How did rhetoric, a once respected subject, come to have a derogatory connotation in our modern culture? Perhaps it was due to its codification. Now that the components of charisma have been examined and deconstructed, the same thing may happen to it. I can imagine people discussing the latest speech by their leader “He talked a lot, but really didn’t say anything. It was just so much charisma.”

O.F. Cabane. The Charisma Myth: How Anyone Can Master the Art and Science of Personal Magnetism

This entry was posted in communication, Emotional intelligence. Bookmark the permalink.