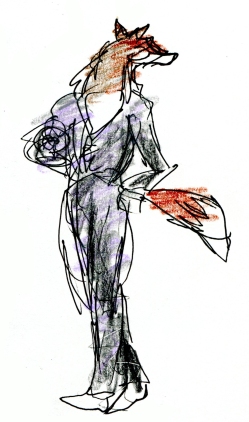 The rebel with a cause is one of favorite heroic types in fiction. But the “foil” of the principled nonconformist, the unprincipled conformist, is also a common antagonist. What makes this character so villainous? Conformity requires that a person at least appear to follow a set of rules. So how can a conformist be unprincipled? A required similarity within a group can mask controlling force that is actually harmful to the people within the group.

The nature of this harm can express itself in a number of ways. One of the most common is the exclusion of people for insignificant reasons. In order to create the strong camaraderie a common enemy needs to be found. There are two reasons groups do this: one is the age old reason that wars exist, to take something of value from another person. Exclusion allows the group to gain. The second reason is to shift what the group doesn’t want onto the shunned people. Blame for any problems is shifted onto the scapegoats.

The difficulty with both of these actions is that in the end they destroy the group. Whether the exclusion is used as an excuse to take away wealth or credit or influence from the other person, or simply a social snub, it results in physical pain. This pain tends to cause the excluded people to avoid interacting with those people, even if they would prefer to conform in order to fit in. [1] This results in the group seeking out a fresh scapegoat, and this process continues until an apparently cohesive group crumbles from the inside out. The other “harm” caused by unprincipled conformity is the squelching of individuality, leading people to become rigid in their behavior.

How is the unprincipled conformist brought to a demise? By persuading this trickster’s followers that they have been following a leader that will use and destroy them. This job falls on the rebel with a cause. Often it is the stirring speech of revelation, not the physical knock-down drag out fight, that brings an end to the unprincipled conformist.

[1] Eisenberger, N. I.  (2012)  Broken hearts and broken bones: A neural perspective on the similarities between social and physical pain.  Current Directions in Psychological Science, 21, 42-47,

This entry was posted in Creativity, Group psychology and tagged cliques, exclusion, scapegoat. Bookmark the permalink.