No one wants to laugh alone 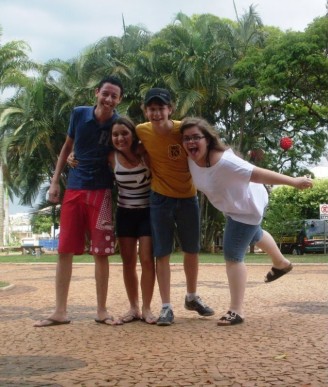 Just beyond the door of my office a photographer was setting up a lights. He was also chatting with everyone who passed by. Finally he got down to the business of spreading out the tripods that held the lights. Then, I heard a clunk and soft crunch followed by a giggle from the resident of the office next to mine that keep on going. Even though I didn’t see, I didn’t have to wonder what was so humorous. The photographer told the story to every upper level manager that came to pose for their business portrait.

“I was setting up the lights quickly, and didn’t bother to move the boxes they came out of. At one point I over extended myself and landed on the box. I didn’t think anyone saw and then I heard the laughter that keep coming.” The photographer told the story chuckling at himself much of the time.

I understood the purpose of his self-effacing humor. He wanted the harried executives to relax and look more pleasant, and his humorous little story helped. If he had actually hurt himself the woman in the next office wouldn’t have laughed so much. What is interesting is how we spontaneously laugh at someone else looking very foolish in a manner that tends to actually bring us closer together. Chuckling serves as a social glue and we often laugh at something that is not really funny at all.  As researcher Sophie Scott begun to study expressions of emotions and in particular laughter she found that the person who typically does most of the laughing during a conversation is also the person that does most of the talking. It appears being mirthful is a way of trying to maintain social relationships.

Most of us are familiar with fake laughs – chuckles and giggles interspersed in conversation when nothing funny is said. Scott studied not only the difference in sound of these forced laughs but also the difference in the way that the brain responds to this kind of laughter versus the authentic kind. Interestingly response to different kinds of laughter is based more on the relationship with the person than whether the laughter is faked or real. If we dislike a person, their frequent faked laughter will strike a note of discord.

Most important in Scott’s research on the social aspects of humor is that people prefer comedy when in groups, in fact the larger the group, the more people tend to laugh. When my daughter was younger, we started watching “America’s Funniest Videos” – an almost endless parade of short video clips showing people slipping, sliding, missing a step, or whatever would cause a fall. Sometimes these were punctuated by trying out ridiculous ideas, such as the preschool teacher who tried to hang a piñata on an emergency sprinkler head and ended up showering the eagerly awaiting little ones. However as she got to be a teenager when it was no longer cool to hang out with parents, she still wanted keep up this ritual. Laughing is just not as enjoyable if you are not laughing with someone else.

David Robson, Why do we laugh inappropriately? BBC Future 23 March 2015

This entry was posted in Group psychology, Laughter and humor. Bookmark the permalink.