When does “engaging” interfere with learning? 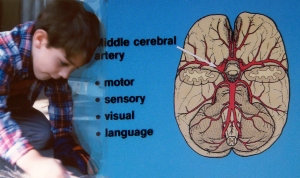 Recently, I was surprised to see an article by Ruth Clark entitled “Why Games Don’t Teach.” According to research, a simulation game made a less effective teaching tool than a computerized tutorial.[1] One of the things that I noted as my own children grew up with computers was that as learning games became more complex in use of visuals and audio, they often became less complex in the kind of thinking required to play them. Some of the earliest text based scenario games (like Oregon Trail) required more reflection from players on making decisions and keeping track of results than later games with beautiful graphics and audio.

How do more engaging games affect learning? At one point, I was attempting to give my daughter reinforcement on phonetic reading using a computer program that provided a game like atmosphere for read instruction. At first this seemed to work, but she just did not seem able to master a rhyming exercise. So I watched her. The animation of the alligator, followed by a fire-breathing dragon that occurred whenever students missed too many answers was so intriguing that she kept making mistakes on purpose. The same elements that made the game  emotionally engaging, prevented her from moving forward in learning phonetics.

I observed in schools as some students using computer games to learn math became frustrated because the “logic” of program was not same as theirs. The processes to learn math were developed by specialists in that field. But math problems can be worked in more than one way. Some alternative ways of solving a problem that makes less sense for an expert, makes more sense for the students. This occurs not only for application of math but also problem-solving in science, reading and writing.

Often students do not refuse to complete the work because it is not engaging, but because it requires an extended effort that they are not used to giving. When I would get my daughter started on a game requiring careful attention and problem-solving skills (like Oregon Trail) she would give up the first time her party died. So what are computer-based simulation games used for in education? Human factors research shows that cognitive overload limits human ability to integrate all the data that a computer can display.  When teaching we must show students not only how to use technology, but also how to keep track of data so they are not overloaded (or under challenged). This often requires one on one instruction and other students need to keep busy as the teacher provides this. Until the students have enough experience to be learning or creating on their own, an engaging (but not very deep) computer game as a tutor makes an excellent baby sitter in the classroom.