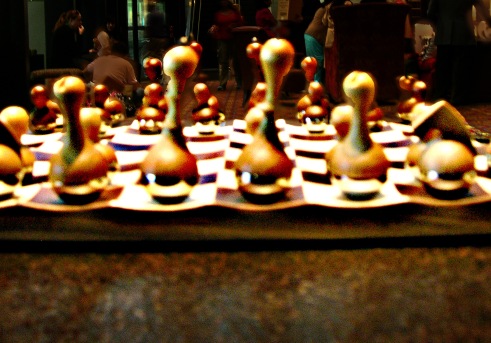 I have yet to see an app that adequately teaches and assesses writing skills. However, the realm of computer games can help. The students don’t play a ‘writing’ game, but they write the scenarios of the game itself. The more sophisticated video games are like movies – they require characters, setting and the framework of a plot for the various scenarios. Although, students may not be able to produce the game, they can still design it.

The first thing a student needs to write about is the concept: What is the game about? Is it a treasure hunt, a battle, a race or an alternate world in which one must figure out how to gather the necessities for survival? “First-person” games are easier to create than role play, which require a cast of characters along with their motivations. Still the following is necessary for “first-person” games.

1) Write a brief  historical over view or backstory that sets the stage for the game. All other descriptions need to be consistent with the backstory.

2) Next, illustrate how the player moves through the game and goes from one level to the next. This should be done as a flowchart with alternate branching.

3) Describe the initial setting, including camera angle as seen by the player. This should include both visuals and sound.  Students should describe at least two additional settings that the player can move into.

4) Describe the important objects in each setting that the player can use. It is crucial to detail what the object can do, including limitations.

5) Describe the non-player characters or NPCs that the player encounters during the game. These can be foes, accomplices or neutral characters that change depending on how the player interacts with them. This description lists NPC’s responses to various interactions.

6) Finally the student is ready to write the storyboard script which is similar to writing movie scenes.

This is not a short process; the class may spend a week or two, or three, or more depending on the depth of the backstory, complexity of the flow chart and number of settings that must by described. However, this is an excellent way to get students involved in an extended effort to create a product that involves many of the same skills required to produce term papers.

Of course this brings up another point – plagiarism. There are many existing games, and websites or even books with backstories for these games. Students who do not want to put in all the work, will be tempted to copy these.  Internet searches can bring up some reference, to check. However, first you will want to define the extent of copying that results plagiarism so students will know what is expected. Secondly, you must realize that no one creates something completely original. All of the games scripts will refer to things that students have taken from their own experience with games.

For more information and examples read Writing a video game script/storyline by Will Kaliff.

1 Response to The writing game